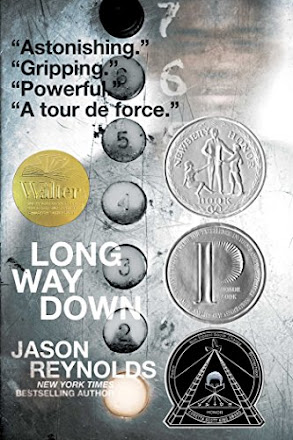 Wow! This memorable novel deserves every award it received. Jason Reynolds tells this dramatic story involving teenage gun violence in short powerful poems. Reynolds has explained, setting the entire book in an elevator, he wanted to mimic the feelings of anger, pain, and helplessness.

Fifteen-year-old Will’s brother was murdered, and he knows the rules. He doesn’t cry. He takes his brother’s gun and is on his way to get revenge. As the elevator stops at each floor, another “person” gets on and adds to the story, another link in the chain reaction. The elevator ride also gives the impression of being trapped in this cycle. When will it end?

Within these short poems, Reynolds develops his characters and their relationships with a punch. His writing is brilliant. I will read this book again and look forward to reading more of his books.

Posted by Frances Judge at 9:16 PM