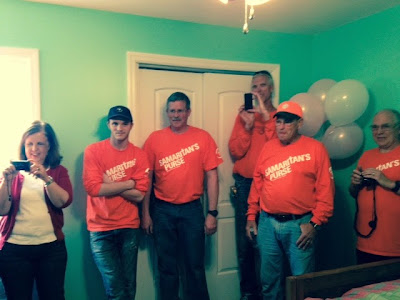 Steve and Samaritan's Purse volunteers surprising my daughter with her finished room.

October 29th is the anniversary I never forget. Not my wedding day, but the day of the biggest storm to pummel our city of Long Beach in 2012. Stepping on crunching leaves and smelling the crisp fall air sweeps up memories of all the days that followed Superstorm Sandy. We lost a lot in one day. Flooding destroyed our home. We had to rip up floors and gut the walls to prevent mold growth, and we tossed out everything wet, from furniture to photos and paintings and clothes. Our boiler was submerged, so we didn’t have heat or hot water. Gene and I had five kids and my mother-in-law to worry about. Hopelessness felt endless as if our home would never be the same. 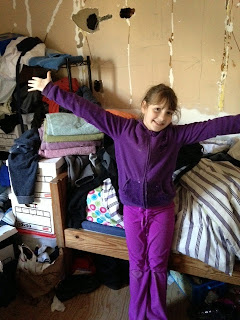 One year later as we still walked on plywood floors, Tall Steve showed up with Samaritan’s Purse volunteers and his huge smile. He was one of the team leaders whose mission was not only to help people rebuild their homes, but to repair hearts as he shared God’s love. He towered over most people at a height over seven feet and was probably asked if he played basketball by someone every day. He didn’t but welcomed the opportunity to talk about someone bigger than he, his wonderful Savior.

Samaritan’s Purse Ministries set up their base at our church. Volunteers traveled from other states across the US and slept in sleeping bags in the children’s Sunday School classrooms. They stayed for a week until the next group came. Volunteers cooked meals with donated food and held a “share” time every evening during dinner. Steve and the other leaders often invited the families of the homes they were fixing to be the dinner guests. They wanted to hear the stories of how God was working in people’s lives. Sounds great, but not to our family made of mostly introverts. We were thankful but didn’t care to speak in front of a huge group of people we just met.

One night, as we drove to the church dinner, my husband said, “I hope Steve doesn’t ask me to say something. I am exhausted. Someone else can share tonight.”

My mother-in-law, Clementine, and I agreed. There are other families that can say something. We planned to avoid eye contact with Steve as we ate, so we wouldn’t get called on like students who didn’t know the answer.

But I think from Steve’s bird’s eye view of us, he could see us hiding our faces in the baked ziti. While our mouths were still full, he said, “Clementine, would you like to share any experience you had this week with the volunteers?”

My mother-in-law answered, “No, but I think my son, Gene, does.”

My daughter and I nearly burst out laughing at the surprised look on Gene’s face. My husband knew if he started to speak of how he felt receiving their help he would choke up. And he did. My eyes watered too as we thought about the kindness of these people. I think Steve wanted to see tears, to see hearts open. He knew the joy that would follow. He thrived on bringing people out of their comfort zone. 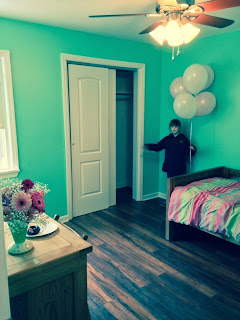 My mother-in-law was so impressed by Steve, she painted a scene of the ocean with him glowing in the rosy sunset and standing on the shore next to a lady. He is pointing to the water as if amazed by the awesome view of God’s presence. She captured his size and his heart in the painting.
Years later, Tall Steve asked if we could make a short family video sharing something to bless his upcoming marriage and be added to a montage, he would give his fiancé on their wedding day. It was an honor to be included, but once again, he dragged us out of our comfort zone. I think we created the most awkward video, but our hearts were in it.

One year after his wedding, at the beginning of the pandemic, we heard Tall Steve went home to be with the Lord. His beautiful memorial was shared on YouTube to be viewed by people around the world. Even in his death, he was able to share God’s light in a huge way.

Clementine’s painting hangs in our living room. Sometimes I stare at the cerulean blue ocean as Steve points from his God’s eye view. And my heart fills with joy. This anniversary reminds me what we lost can’t compare with what we gained from God’s love. 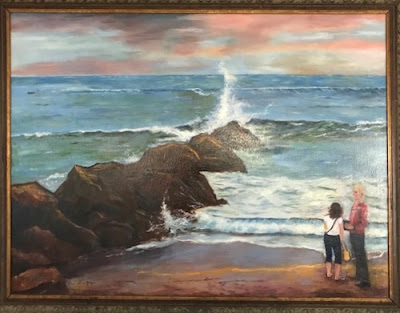 Painting by Clementine Judge (my mother-in-law) 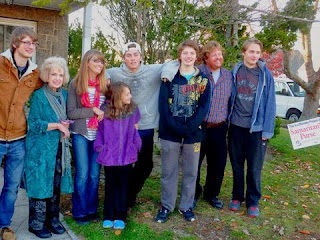 Posted by Frances Judge at 3:41 PM No comments: