A Tale to Tell After Twenty-five Years 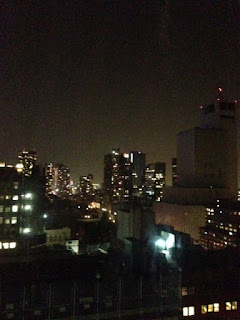 Our view from the hotel 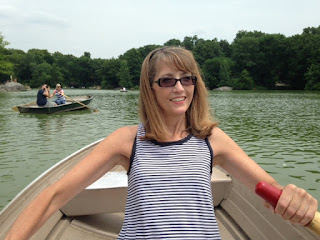 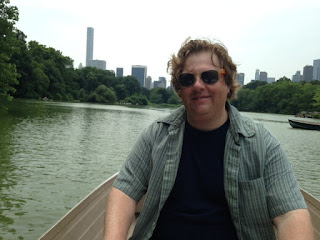 While we were here, what was happening at the hotel?﻿

We could’ve celebrated our 25th anniversary at a country inn. We could’ve camped along a riverbank…could’ve stayed home and relaxed on the beach a few blocks away.


Could’ve, should’ve.
New York City sounded romantic. We met there, dated there, lived there for three months (until I got pregnant and couldn’t stand the smell of roasted pork spiraling its way from the German restaurant directly into my nostrils…and I convinced my husband the pollution could be poisoning our tiny baby.)


It was romantic. At first.


The hotel sat on the upper west side, near Central Park and the Museum of Modern Art. It wasn’t the Plaza, but it was nice and clean and just where we wanted to be for our anniversary. Classical music played in the background as we got our room card. From our window on the fifteenth floor, we could see the tops of buildings.


We swam in the hotel pool on the roof, strolled through Central Park, and rowed a rowboat on a crowded lake. We bumped oars with many strangers who had the same idea. City turtles swam by the rocky edge.
Later, dinner and a movie. Meandering the city streets lit up at night brought back memories of dating and planning our wedding. Romantic, until…


I sat at the desk in our room, enjoying a novel and a late night bowl of cereal as my husband scrolled the TV channels. Something darted past my ankles. Something with a tail. I leaped off the chair, screamed, and spilt my cereal milk.


My husband jumped at my reaction. “What’s wrong?”


“Something grey with a tail just whizzed by my feet!”


“What else? A stray cat roaming the fifteenth floor?”


We laughed as we gathered any food left out—a half of a breakfast muffin in a plastic bag, a couple of granola bars and paper coffee cups. It wasn’t like we had a full garbage can to attract any critters. Then I remembered the bagel half I had left in my backpack, tossed on the bed. I pulled out the bagel in a Ziploc bag. Seemed fine until I noticed a large chunk bit out of the middle.


I held the bag out to Gene. “Did you take a bite from that bagel I brought? Please tell me you did.”


I dropped it and screamed again. “It must’ve got into my backpack while we were gone!”


Dangling the backpack by its corner, I dumped all contents into a garbage bag and shivered down to my toes. That’s when I noticed the hole on the side.


“Look, that mouse chewed through my backpack to get the bagel.” A hole with a one and a half inch diameter.


“That’s a large hole for a little mouse. I’m thinking it could’ve been a rat.”


“It had to climb on the bed where I left my backpack.”


The romance is over when a rat enters your room. We thought about packing up and checking out a day early, but it was after midnight. By the time we caught a subway and train, we’d get home at three in the morning. The whole rat scare had drained any energy to pack, so we stayed.


Of course we barely slept that night. As if we had a monster under the bed. Thankfully, it either stayed hidden or left to snack at someone else’s room.


My husband and I both went to college for four years in Manhattan; we’ve watched rats in subway tunnels, seen mice scurry through our dorms, watched a rat leap into a park garbage can like a squirrel. Guess it’s been a while. Since then we’ve been Long Islandized…or something like that. We don’t have the pleasure of watching rats where we live. Raccoons and other wildlife tend to stay outside.


We checked out the next morning and whispered to the clerk about our unwelcomed guest. He was very apologetic and refunded half of the bill. I could buy a new backpack.


Our anniversary wasn’t exactly what we expected, but we were thankful for a blessed marriage. One fat rat couldn’t ruin our celebration. We had a new memory to add to our collection of twenty-five years.


We could’ve celebrated at a country inn…but that would’ve been boring in comparison. Although next year, we may opt for boring and head north.


Enter His gates with thanksgiving and His courts with praise; give thanks to Him and praise His name. Psalm 100:4

Posted by Frances Judge at 5:49 AM No comments: