A Day in the Life of a Teenage Boy 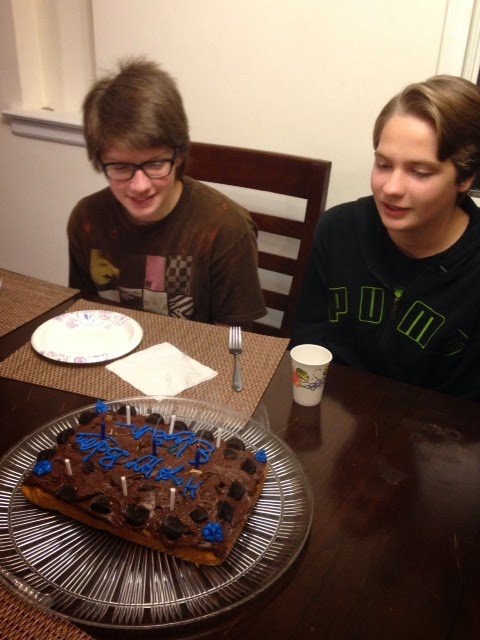 Something changed the day our son blew out his thirteen candles. He accidentally blew away every ounce of energy he had stored in his growing body.


Come with me and we’ll follow my son throughout his day. I’m sure he’d love to show us one day in the life of a teenage boy.


Of course, it’s Saturday, pre-baseball season. Therefore, he has no reason to wake before midafternoon. Mornings are often skipped altogether. We’ll have to wait a few hours.


Good. That low, rumbling sound means he’s alive and might wake in an hour. We’ll try back at two.


“AJ, are you awake yet? You missed breakfast, and you’re late for lunch.”


Excuse me while I explain to him about showing us his day.


I shut the door and wait for him to cool off after informing him of the plan.


Come on in. He’s agreed to ignore us and let us watch him, a teenager in motion. I’ll pay him later.


I know what you’re thinking. “What a slob!” Yes, but he does have help in creating the garbage dump effect. He shares this newly renovated room with his brother, also a teenager.


Notice the posture. Reclining with his head raised on the pillow. He is almost up. He will remain in this position until he finishes whatever game he’s playing on his phone now.


Okay, I see him bending his legs, moving them over the edge of the bed. Yes, he is actually out of the bed at 2:30!


We’ll wait here. He should be returning momentarily. While he’s gone, I’ll point out a few of the difficulties he’s encountered since becoming a teenager two years ago. It seems to become almost impossible for him to bend down if not for a sport. Let’s see what has landed on the floor.


Obviously, the bending down motion has become too much to handle. He prefers to wait for the pile to rise and his mom to force him to clean it. With much grunting, he will eventually carry the garbage to the trash can. Lifting the socks takes extra effort.


Oh good, he’s back. He is capable of pouring a bowl of cereal. Notice how he has returned to the half reclining position to eat it. At least he won’t starve. He needs energy for moving his fingers to play video games.


I apologize for boring you. We’ve been sitting here watching him play that same game for an hour.


We have to make room for the four friends who have entered his room to play another video game. This could be a while. Each boy has brought their own snack. When they leave it here—because they too have the teenage struggle of throwing out garbage—AJ will leave it here too because “It’s not my garbage.”


I will let you know the strange thing about teenagers—at least my teenager—his lethargy is quite selective. While AJ struggles to get out of bed or pick up anything more than an arm’s length away, he is able to churn up massive amounts of energy to play soccer, basketball and baseball, and squeeze out some more to wrestle with friends.


AJ and his friends are finally leaving his room to go play baseball. It’s 4:00 PM. According to this schedule, he will have to have lunch at 6 and dinner at 9. I won’t drag you out to watch a long baseball game, but you get the idea. This is his lazy day.


My personal, non-doctorate, conclusion is with the age of double digits, comes a slowing down.


While the inside of the body, the teenager is busy growing, maturing, gaining knowledge, the outside can barely move at times. My job as Mom is to be patient, encourage any signs of movement, and trust God to help him through these days. Until then, don’t trip over the sneakers left at the front door and keep the teenager’s door closed from viewing.


Posted by Frances Judge at 7:48 AM No comments: