No Time for Tears 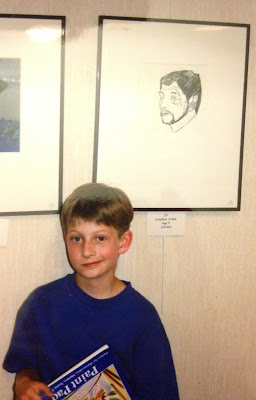 Stephen age nine winning award for charcoal portrait of Grandpa
Today we drove our oldest son to FIT in Manhattan to live in the same dorm I lived in.  I had been looking forward to reminiscing about my days there and peeking into Stephen’s future experience. When I was dropped off, my family got teary-eyed saying goodbye; I never forgot the feeling of watching their car drive away. Now I’d get to be on the other end. I expected to have a special moment with Stephen when I say something wise and encouraging that he never forgets. While Gene drove, I flashed back to special times: enjoying Stephen’s first smile… teaching him to read…playing stickball at the beach...and on and on. Twenty years of memories rolled a ball in my throat.
So I focused on what I could say: “From the first moment I held your wiggly body, I’ve prayed for you, for God’s protection and guidance,” but Gene interrupted my thoughts, reminding me I shouldn’t cry—“He’s only a 45 minute train ride away.” I was sure I would.
********
At FIT, security guards blocked off 27th Street between 7th and 8th Avenue and let cars in to drop off students and their stuff—and that’s it. We were handed a sheet explaining the “drop-off policy.” Empty your car and move it.
We dragged out our time a bit; while Gene set up Stephen’s computer, I guarded our Ford Explorer against tow trucks. The attendants didn’t say a word to me, but checked their watches. I watched the door and planned what I’d say if they told me to move the car. “I don’t have the key; I’m waiting for my husband.” You couldn’t pay me enough to drive the streets of Manhattan. Or I could explain my city-driving phobia…but they didn’t look the sympathetic type.
I texted, “Hurry up!” still waiting to have my special moment.
Finally they came down and said goodbye to each other, expecting me to do the same and hop in the car. But wait! I had to go upstairs and see my old dorm and say my words of wisdom. Gene, Stephen, and his roommate looked at me like confused puppies and asked, “Why?”
I shot Gene a warning look—warning our ride home would be miserable if he didn’t listen. “I’ll just be a second.” I could almost hear the “oh brother,” complaints in their heads as they led me up the stairs. The dorm didn’t have any of the nostalgia I hoped for; it could’ve been any building. I literally walked in their room peeked out the window and said, “This is nice,” and left. There was no “special moment.”
I raced downstairs, gave Stephen a quick hug, and came back to an empty parking spot. A mother guarding her kid’s stuff informed me that my husband tried to stay but was forced to leave. “Oh great!”
I spotted our Explorer turning the corner at the end of the street, so I raced to catch up as fast as I could in flip flops. He didn’t see me waving my arms like a crazy person and kept driving. Thank God for cell phones…he eventually circled the block and found me.
*******
So that was our day: a whirlwind drop-off with no time for tears and reminiscing. Totally not what I imagined.
Stephen didn’t get to hear my speech—probably a good thing, so we’ll just have to trust God to guide him. A better idea anyway.
Stephen age 20, the happy animation student
Posted by Frances Judge at 4:42 PM